We specialize in the production of special and special valves, individually manufactured according to the requirements and needs of the customer with the privilege of shortest delivery time on the highest quality level.

Production according to your requirements:

✓ Different pipe connection forms on each side

Small industrial valves up to and including 2-1 / 2 inches can be supplied with different pipe connections. Here it is possible to provide one side with a flange, and the other side with a welding end or welding end.

✓ Flange connection according to ANSI standards and your specifications

Welding or weld-on ends and threaded connections are available in numerous designs, so that they can be optimally matched to the customer’s specification. This is particularly advantageous because many customers have only a certain length in the pipeline available where can be installed between the industrial valve. By adapting the valve face to face, the gate valve, shut-off valve or ball valve adapts optimally to the pipeline.

✓ Production according to your specifications and drawings

For volume and pressure control shut-off valves are preferably used with control cone. By a simple modification to the cone of the valve, this valve can also be used as a control valve.

Spindle extensions for gate valves, shut-off valves or ball valves are primarily installed. As a result, those valve can be installed in the soil and operated above the ground. Spindle or spindle extension are hingedly connected to the shut-off. The insulating attachment is used in the low temperature range down to -200 ° C degrees. In this temperature range findustrial-valves are usually housed in an insulation. Through the insulating attachment, the handwheel of the valve remains outside the insulation and the stuffing box gland is freely accessible. The risk of icing of the valve stem is significantly reduced by this type of construction.

To reduce emissions when pumping liquid or organic substances, so-called TA-AIR or also known under Low emission packing, stuffing box packings or seals are installed. In industrial plants, a wide variety of valves are used to realize the processes that occur. For operation, industrial-valves such as e.g. Gate valve a spindle that leads from the product room to the outside to the environment. This actuating spindle is equipped with a sealing system. The increasing sensitivity with regard to emissions require a special spindle seal, which, among other things, allows leakage-free use wherever possible. The use of TA-AIR packages significantly reduces emissions.

Against unauthorized operation of the industrial-valves, we install as desired any locking options. 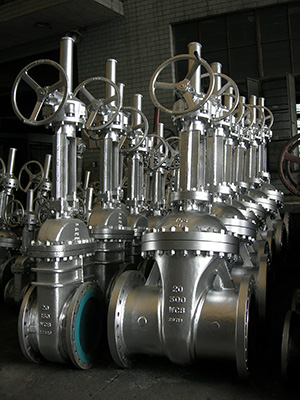